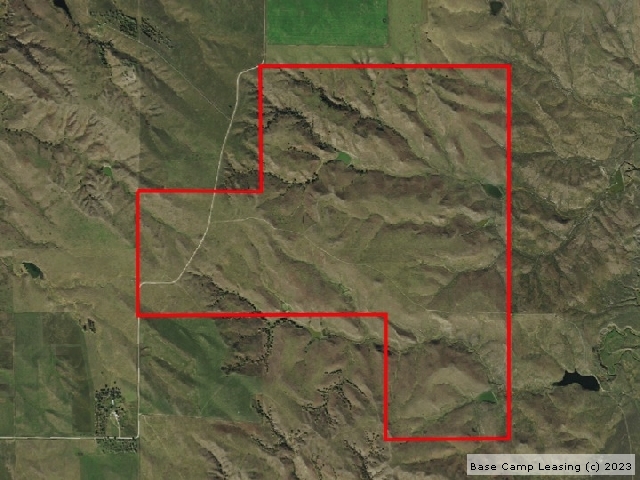 You are entering a deposit payment screen for Property #9319

A mix of mule deer & whitetails in-habit this rolling prairie landscape! The species ratio is likely in favor of whitetails. Steep draws on the north end contain plum thickets and tree cover in the bottoms. The south end is rolling with less tree cover, but still has numerous places to hide a buck! I believe grouse and coyotes could also be hunted here with success. Cattle graze the property during the summer months and are generally removed in October. A couple guys could bow-hunt, with tree stand potential on the north end. Otherwise for archery tactics - spot & stalk or ground blind options could be found over the entire property. Rifle hunters could stake out a high point anywhere on the property and very likely see deer.

The landowner is unwavering on the fact that he does not want ATV's or UTV's on the property – the reason being there are steep side hills with cattle trails and washouts that could easily roll an ATV. Landowner is ok with respectful use of full-size vehicles on established trails.

West River SD rifle deer applications are applied for in June. You would apply for the state tag unit WRD-60A – Tripp County. Type 01 is "any deer" meaning you would be allowed to take a mule deer or whitetail; type 18 is valid for "any whitetail + antlerless whitetail". In 2019 applicants with zero preference points had about a 65% chance of drawing the any whitetail tag. You could still apply for this year with no preference points and go rifle hunt for whitetails. Season dates are November 14-29 in 2020.

***For 2020*** It appears there are still remaining "Any Whitetail" – special buck tags for non-residents. Accepting applications beginning July 27 – apply West River Special Buck - WSD-WR111. This would allow you to take any whitetail during the gun season as a non-resident on private land west of the Missouri River.

Check South Dakota Game, Fish, & Parks website, search "draw statistics" – you will likely need preference points for the "any deer" gun tag. The West River Special buck tag may also be an option. Non-resident archery tags are available but must be applied for and received before the hunt. This property limited to a 2.5% annual price increase.

South Dakota hunting leases can offer some very diverse hunting opportunities. In the West you will find the beautiful Black Hills and vast rolling prairies choked with game rich river bottoms. To the east of the Missouri River there is fertile farmland dotted with hundreds of lakes and prairie potholes, along with several great drainages. The Missouri River splits the state in half from East to West and offers world-class walleye fishing along with many other species. On its banks there are countless cedar filled draws and breathtaking scenery.

Both whitetail and mule deer call South Dakota home. The mule deer are found mostly in the Central and Western part of the state while whitetails are found throughout the entire state in great numbers. Both nonresidents and residents are guaranteed an archery tag every year if they wish to apply. The archery tag is good for whitetail or mule deer and runs from late September through the end of January. There is a draw system in place for rifle deer tags.

There is also exceptional Pronghorn Antelope hunting in the Western half of South Dakota. There is a draw system in place for rifle antelope, but once again the archery tag is guaranteed but must be applied for.

The turkey hunting in South Dakota is almost unmatched. The turkey season usually runs from early April until late May and the archery tag is guaranteed but must be applied for. Again, there is a draw system in place for gun tags. Odds are you will be hunting beautiful white-fanned Merriam's turkeys in South Dakota.

South Dakota also has excellent waterfowl hunting and the best pheasant hunting in the country. According to South Dakota Game Fish and Parks, the last time hunters harvested less than 1 million roosters during a South Dakota season was in 1992 and that year the count was at about 970,000. The daily limit is three rooster pheasants. If you're looking for South Dakota hunting leases you came to the right spot!