Announcing a New Time for the Property Alert Newsletter 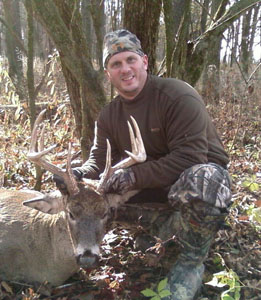 Bob Rogers has lived, hunted and fished in Eastern Pennsylvania his entire life. The only seasons he missed were when he was on active duty in the Marine Corps. Bob has a degree in criminal justice, has served as a Conservation Officer and is currently employed in the Criminal Justice field.

Bob has a passion for being in the outdoors. When he isn't hunting, he is scouting or fishing for trout and Smallmouth Bass. He has had opportunity to hunt in many different states and has been fortunate to take some nice whitetails, turkeys and bears. Bob has hunted from the Pocono Mountains in northeastern Pennsylvania to the urban hunting areas of southeastern Pennsylvania. Bob currently leases property in Pennsylvania and Ohio and is very skilled at evaluating properties from a hunter's viewpoint.

Eastern Pennsylvania currently has a three point antler restriction for its whitetail deer. Some very nice trophy bucks have been taken in recent years. Pennsylvania also has a very good black bear population with some of the largest black bears in the nation. Licenses can be purchased over-the-counter or online. Eastern Pennsylvania offers some very diverse hunting property; it ranges from heavily forested mountainous areas to flat open farm land.

If you are a landowner in Eastern Pennsylvania or New Jersey who is considering leasing, know that Bob will work closely with you to evaluate your property in an honest and open manner for the mutual benefit of you and the hunter(s).

For more information on Pennsylvania and New Jersey hunting leases, feel free to call Bob at (570) 762-7905.