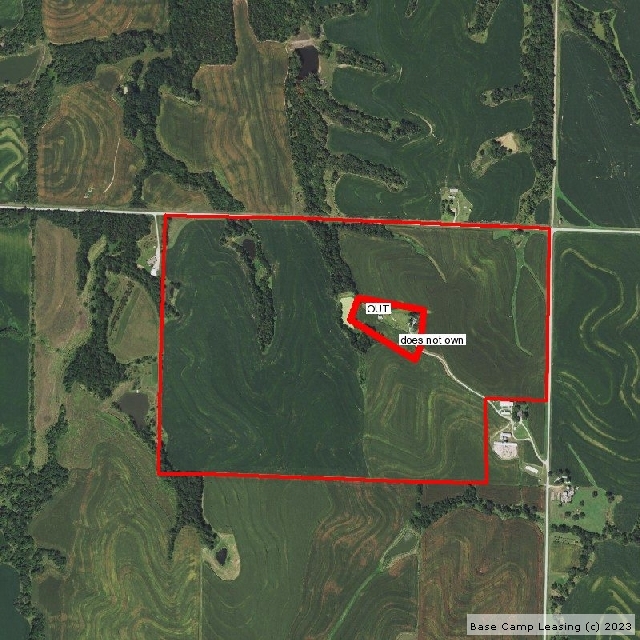 You are entering a deposit payment screen for Property #6820

Here is a nice whitetail and turkey property. This property contains 3 parcels of land. The main piece has a couple of wooded draws with oak trees and shallow ponds surrounded by cropland. Deer tracks where common in these wooded areas.

South of the main parcel are two other pieces that are predominately cropland, but have potential stand/blind sites that will stretch your hunting opportunities. Two people hunting the entire property at one time would be enough.

Lodging is nearby in Auburn, NE. No driving on standing crops. Deer and turkey hunting only. I did not see any turkeys the day I was there, but I would imagine they use the woods on the main property during the spring. No pheasant hunting and no quail hunting (there not many around and the landowner would like to increase game bird populations). This property limited to a 2.5% annual price increase.

Nebraska is often overlooked for trophy whitetails. The genetics, food, and climate exist nearly statewide to produce giant bucks, leaving only one factor to determine whether or not a trophy buck is produced. Age is a factor you can control with a Nebraska hunting lease, and often is the only limiting factor to true giants! With a Nebraska hunting lease you have the first right to renew every year, so passing on the younger bucks can pay off. According to the Game & Fish the age structure of whitetails and mule deer bucks continues to improve. A 4 or 5-year old Nebraska whitetail buck could easily gross Boone and Crockett or better.

A 20-year trend of increasingly older bucks is expected to continue. In some units, 90 percent of harvested bucks were age 2 or older. Antlerless whitetail permits are easy to obtain. For those who are trophy hunters and for those who are meat hunters, the possibilities have never been better in Nebraska.

Application period for firearm & muzzleloader either sex deer tags opens in April, with leftover tags available to the close of the season. Hunters may obtain no more than two permits each year that allow them to harvest a buck. There is no limit to the number of antlerless permits hunters may have.

Nebraska has some of the best turkey hunting in the country. Abundant birds statewide with denser populations along wooded streams make it an ideal turkey-hunting destination. You can purchase up to three spring permits online. Nebraska has Merriam subspecies in the West. Rio Grande & Merriam hybrids exist in places along the eastern half of the state. The Eastern subspecies of wild turkey is also present in counties that border Iowa and Missouri.

Nebraska truly is an upland game hunter's paradise, with a dozen species of birds and small mammals available to hunt. Ring-necked pheasant remains king; however, grouse, quail, woodcock, dove, and partridge offer bird hunters a variety found in few other states. The pheasant and quail season is long, extending to the end of January. It would be easy to set-up a great deer lease and get some awesome bird hunting out of the property in January.

Nebraska has phenomenal waterfowl hunting opportunities, especially in the central part of the state. The rainwater basin and Platte river areas are in the heart of the central flyway and many migrating birds stop in these areas. Check out the Platte, North Platte, and South Platte rivers as well as the Loup, the Republican and the Missouri for excellent mallard and Canada goose action. If you enjoy waterfowl hunting look for a lease in the central part of the state with large wetlands present or access to a major river.

Western Nebraska has some great antelope hunting with record book animals taken every year. For the firearm antelope hunting season residents have preference, so basically all muzzleloader and firearm permits are purchased by residents, however, it is expected that some firearm permits will be available to nonresident landowners after mid-June. Archery antelope permits are unlimited and available to residents and nonresidents. If you like to bow-hunt look for a western Nebraska lease with access to mule deer, whitetail, antelope, and turkey.

Nebraska's elk herds are growing, and the population now exceeds 2,000. Residents will purchase all bull and cow tags before the nonresident application period opens, but some landowner cow tags will be available to nonresident landowners. Bull permits for non-landowners are once-in-a-lifetime. Basically, if you are a non-resident and non-landowner you will not be able to get a Nebraska elk tag at this time.

With abundant deer and turkey the "good old days" of hunting are right now in Nebraska! Age of bucks has never been better. You are guaranteed an archery tag and you could likely get a firearm/muzzleloader tag every year depending on your unit. Youth tags are only $6 for deer and turkey. Nonresident deer tags are $209 and nonresident turkey tags are $91. Nebraska is a great state to hunt. Check out Base Camp for Nebraska land for lease and multiple listings of Nebraska hunting leases!