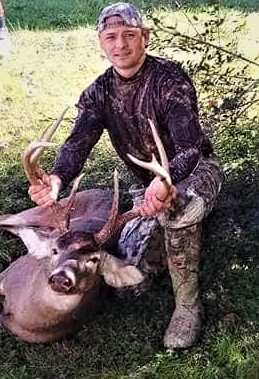 Dustin Shadowens is the Eastern Tennessee Leasing Agent. Dustin was born and raised in middle Tennessee in Cheatham County and was a self-taught hunter.

He became interested in hunting and wildlife at the age of 12 and gained most of his knowledge initially be trial and error, then started reading books and magazines on hunting different species. He has taken over 100 deer with numerous Trophy bucks since then. Also, an avid turkey and duck hunter. Most of his harvests have been on Public Hunting Grounds. He became a firefighter/EMT in his hometown of Ashland City in 2004 where he still resides and works. In 2006 joined the Army Reserves until 2010.

Dustin is married and has two children the age of 9 and 10. He keeps his family involved in the outdoors in hopes that his children grow and learn to use and respect it just as he has. His goal is to help others find great hunting land and opportunities to hunt and manage in hopes of taking mature deer that most strive to do on Public Hunting Lands.